For the last few years, I’ve been sporadically working on a little computer game. I wanted to make games ever since I learned how to program. About a decade and a half in, that’s one of the things that still hasn’t changed. I’d written a handful of tiny games (mostly Snake clones), have a bunch of unfinished projects from very early on and a couple of game/educational bits and pieces.

Apart from my teenage years, I had never sat down and decided to actually design and build my own computer game. Until Dose Response came along.

The original idea (and I think it was inspired by a conversation on the hunger clocks in Roguelike Radio as well as a few words in The Fall) was this: you play an addict. You need to get your fix to keep going and if you don’t, you die from something akin to delirium tremens (or a real delirium tremens if you play an alcoholic). Unlike normal food in roguelikes though: you can die of overdose (and you don’t know how pure each dose is – could be watered-down or really strong) and over time, you develop tolerance, driving you to taking more and stronger stuff.

And that was basically it – make a game around this concept, change the gameplay depending on whether you’re intoxicated, sober and withdrawn, add interesting systems and see where it ends up.

This is where the game was for a long time. Some reasonably interesting systems and ideas, but I could not figure out how to make a coherent thing out of them. There was a ton of things that needed work – the map generation was literally just randomly placing stuff on the map, the UI needed a ton of work, there were bugs, information that was presented in a confusing manner, etc. etc.

I could spent ages working on these things, but none of that was related to the actual gameplay and so I worried I’d be wasting time polishing a turd.

And so the development mostly stopped. I’d still jot down ideas occasionally, but I didn’t know how to actually turn what I had into a real game. I couldn’t even figure out how to add an ending to it.

If this were a generic fantasy dungeon crawler, you could just add a final level, some tough boss and an item to collect as a placeholder for the real thing. But that wouldn’t exactly fit the addiction theme.

About a month ago, I was considering just admitting a defeat and scrapping the whole thing. I don’t think there’s any point working on a shit game (unless you have ideas to turn it around), but I was uneasy about giving up on Dose Response because it felt like it hadn’t even had a chance to be a shit game.

There’s this saying in the software world (and I’ve heard the same thing in the game development circles): release early & release often. But I thought that I should at least wait until I have something that is an actual game before I start showing it around.

Seeing as there was no way for me alone to move forward however, there was little else to do but to talk it through with someone.

And so I’ve shown the game to my wife (who doesn’t play games, but had a fresh perspective) and to a good friend who does, but isn’t a fan of roguelikes and low-budget graphics. I told them about the current state of the project, what I felt was blocking me and started to listen.

To my amazement, this actually seemed to work!

Their comments and suggestions helped me to get my mind unstuck. Not everything was directly applicable or going where I wanted to take the game, but they helped push me in the right direction. Or more importantly a direction.

So I’ve added a few more systems and finally figured out a reasonable placeholder to actually win the game. And after a ridiculous amount of tries, I’ve managed to beat it.

And that’s where we are now. It’s still incredibly far from anything people might actually be interested in playing (and that’s assuming it will ever end up being fun for anyone other than me), but the whole game feels much more cohesive now and I’ve a few more ideas to make it better.

And at some point, when I’m reasonably satisfied with the actual gameplay, I’ll start working on polish and all the other things necessary for it to be playable by actual human beings.

This may all still end badly – the game can turn out to be crap, or I might end up abandoning it or whatever. I will promise no release date or regular updates or anything like that. But it’s actually something that sort of works together and is playable now. 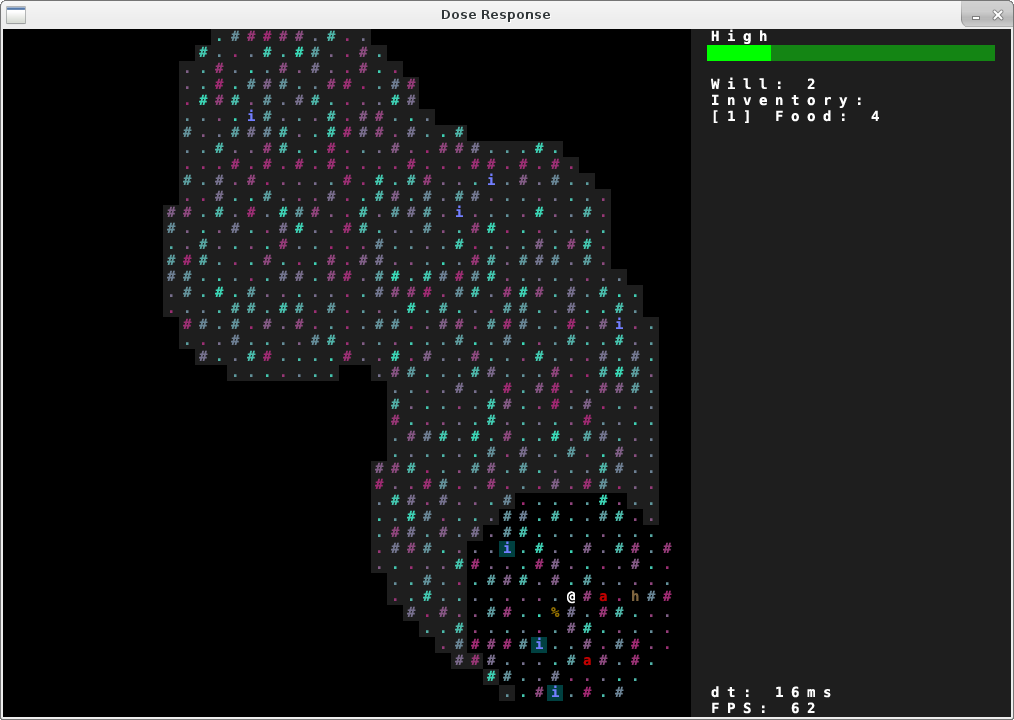 If you’re feeling adventurous or incredibly bored, you can download a build and give it a go:

I’ve also updated the Dose Response project page. Any new information, downloads and whatnot will end up there.

Hi! I wrote a game! It's an open-world roguelike where you play an addict called Dose Response. You can get it on the game's website (pay what you want!), it's cross-platform, works in the browser and it's open source! If you give it a go, let me know how you liked it, please!