I've had my best birthday present yesterday. Back in March my fiancé booked a climbing instructor for a day to teach us how to climb on rocks. It took a while before we figured out the right date (weather, my trip to Atlanta, the illness and other scheduling miscellany) but last Sunday was a go.

The venue is called Bohuňov rocks, about an hour north from our place. We've had a wonderful weather (a bit on the chilly side but we worked up the sweat in no time), the surrounding area was gorgeous and the rock itself, perfect. 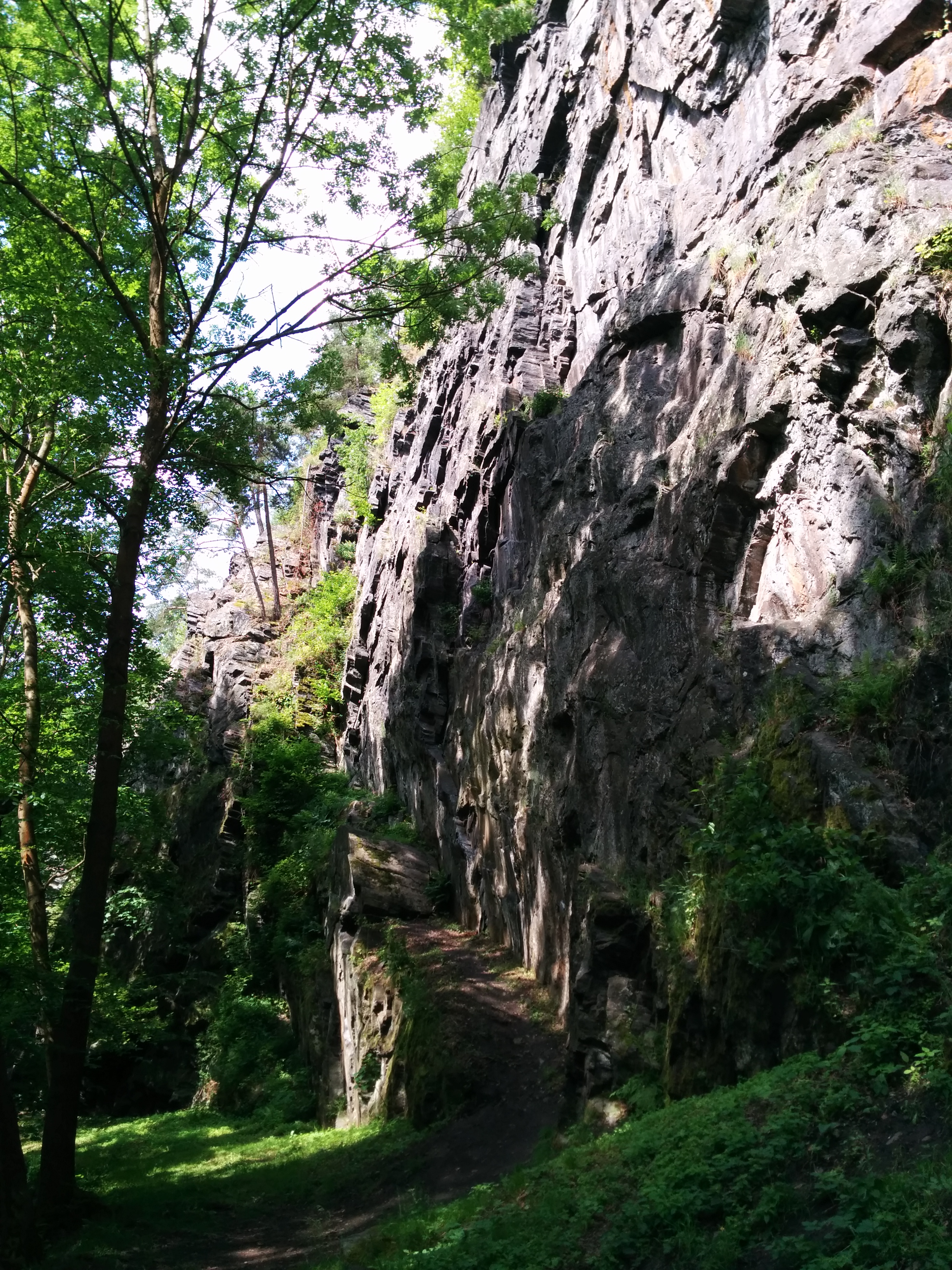 I've been climbing for about two years, but mostly in indoor gyms. Been to rocks a few times, but always with an experienced partner who knew all the safety procedures, had the right gear and generally knew what he was doing. I'd never think of going just with my regular climbing buddies, but wanted to change that. Hence this course.

We started off easy: we did a warm up route and then followed up with some theory. What gear to use, how to put the quickdraws in properly (that's the first big difference between indoor and rock climbing: you carry your own protection gear and have to place it on the rock before securing the rope).

Then the instructor asked me to belay him and climbed a slightly more challenging (but still fairly straightforward) route. And then asked me let go of the rope.

If you know anything about indoor climbing, but haven't done a lot of rock stuff, that may be a huge surprise for you. Indoor, the belayer never stops protecting the climber until they're safely back on the ground. Should the climber fall (which could happen any time), the belayer is the only thing standing between them and the ground.

Rocks work a bit differently. Once on top, the climber uses their gear to anchor themself to the rock, at which point the rope is no longer necessary so the belayer can go off.

I was then asked to tie in and climb after him, collecting the gear along the way, while the instructor belayed me from high above. I've never seen that before, much less done so, but I've read a bit about multi-pitch climbing that's how you do it.

If you want to climb a rock exceeds your rope length, you can't do it in one go. So the leader gets to the first anchor point and starts belaying their partner. The partner reaches the belayer and then moves on to the next point, becoming the leader. Until the next anchor, where they switch roles again, and so on.

We didn't climb any multi-pitch routes, but this technique is crucial in single-pitch climbing, too. So I got to the top and was shown how to anchor securely and how to belay from there. We've spent about 20 minutes talking and practicing, while being some 25 metres above the ground.

Then we put it to practice.

I attached a carabiner to the rock, tied the HMS knot around it and Veronika went on to join us. Belaying someone who's way down below is a very different experience. On the plus side, your neck doesn't hurt from looking up. On the minus side, it's rather difficult to see what's actually going on down there so one has to be much more careful and rely on feeling up the rope's tension and so on. I was surprised by the knot's effectiveness. It's really simple and provides quite enough friction and flexibility to do the job securely.

Once she got up, I lowered her down again and we moved to the thing I was most frightened of: abseiling. That's when you pull the rope through a loop in the rock, attach yourself to it and slide down.

I'm not quite sure why it feeels so scary: when you're in a gym, your safety is largely in someone else's hands. Here, it's all under your control. I guess I'm too aware of my own fallibility. Not to mention that being physically and mentally exhausted after a difficult climb is hardly the best time to put literally your life into your own hands.

But there are simple and strictly logical procedures one can (must, really) follow to greatly reduce the risk. Preparing the rope for the abseil before you detach yourself from either of the anchors (so you never rely on a single point of protection), tying knots at either end of the rope (so it doesn't slide under you if you miscalculated the lenght), using the Prusik knot as an emergency break and putting your weight on the rope before you detach the anchors (so you know the rope is holding you securely).

Even with the instructor checking my every move, it was still unnerving to start lowering myself down.

But it went fine. Easier than lowering a climber on a top rope, in fact. When you abseil, you put two strands of the rope through your belaying device and the Reverso provided more than enough friction. Plus you can set your own tempo.

It should have been obvious, but I still didn't expect the next lesson: the same thing as before only I'm all on my own this time. Oh and the next route was a fucking bitch. 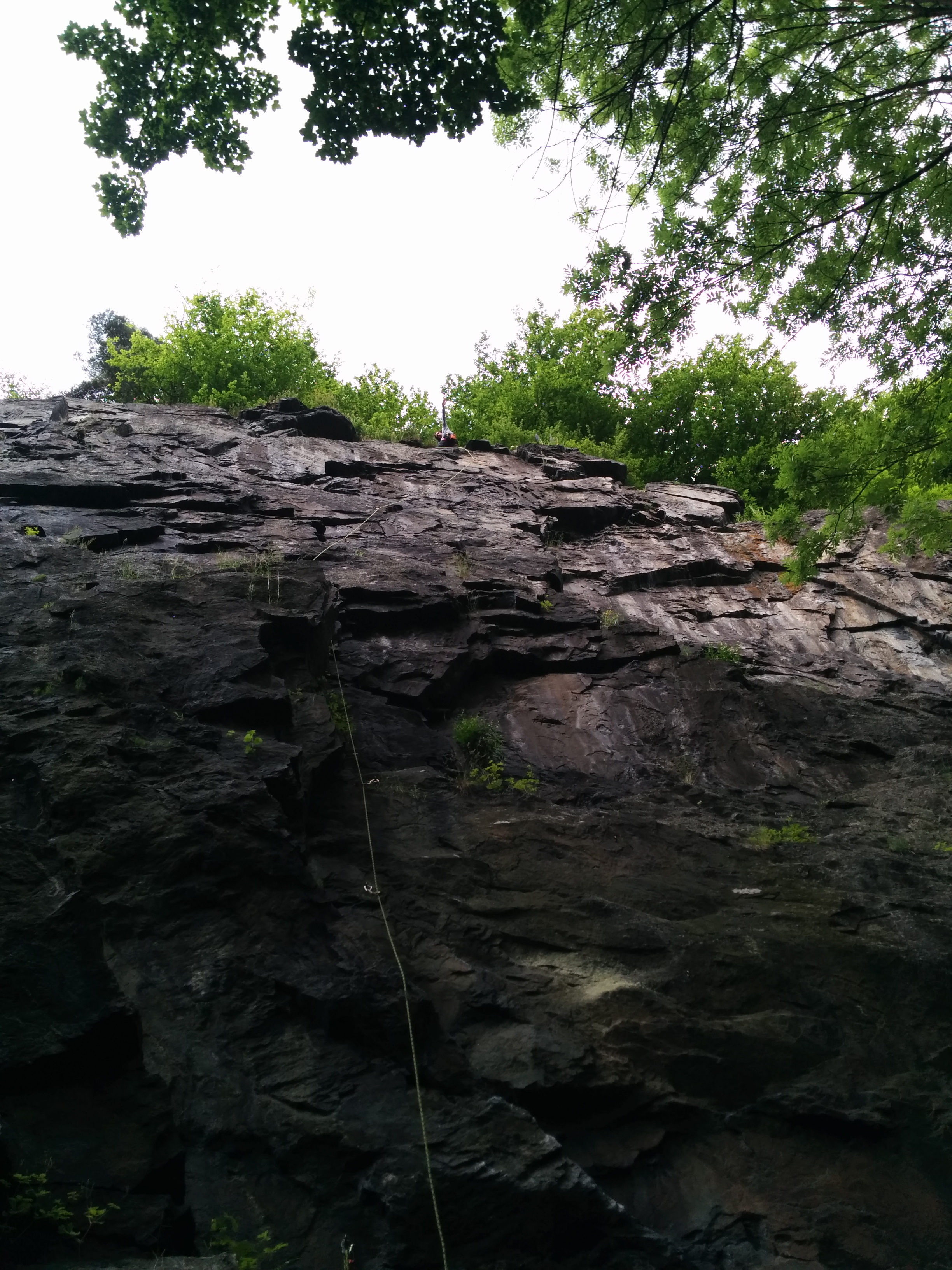 I've always been weak, physically. Especially my hands. Now, climbing did give me some strength and endurance, but I'm still on the weaker side. And the thing with leading a rock route is, you have to carry the protection gear with you. That's added weight you're not used to from climbing gyms. _(leading is what you do when you're the first one to climb a sport route -- the length of the rope is on the ground and as you come to the checkpoints in the rock, you place the rope through the protection gear. So if you fall at a bad point, it can be quite a drop)_

After a huge amount of struggle and frustration (I was ready to give up several times, but I felt embarassed) I finally got to the top and slowly set up the anchor. And then belayed the instructor who checked everything (of course if I'd screwed up, it would have been too late) after informing me that apparently some of the good holds fell off during winter so the route was harder than he expected (thanks!).

And then I lowered him down. At which point I was once again on my own and had to prepare for the abseil and execute it without supervision.

To say I was unnerved would be an understatement of the day. 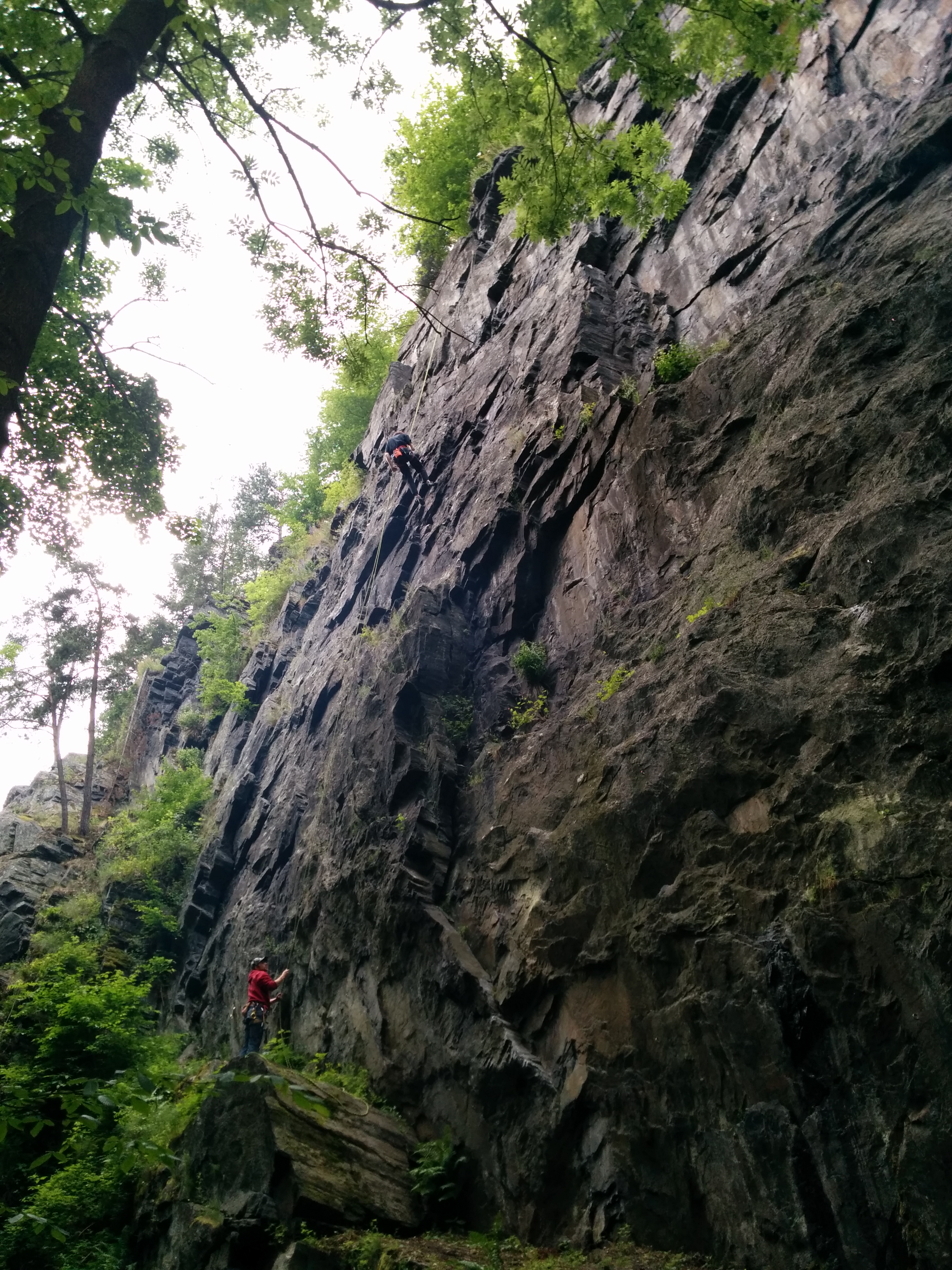 Afterwards, I was completely spent both physically and mentally. But everything went smoothly and I've learned loads and had a great time climbing, too. At that point, we'd been there a few hours already and he said he taught me pretty much all I needed to know, so I was content to say goodbye and enjoy a long hot tub at home.

But of course the instructor thought that more practice would be a good thing, not to mention that the next time we set out for some rocks, it will likely be just Veronika and myself so we should make sure we can handle ourselves.

And so we climbed two more routes -- this time without any help or intervention at all. Veronika belayed me, I lead up to the top, set up an anchor, have her climb up and lowered her back down and then abseiled on my own again.

And we managed! Things were a bit bumpy along the way, but we are in fact capable of ascending a rock and getting back down, safely.

This is a wonderful feeling.

The entire experience was very intense and sometimes frightening, but it was very much worth it. I've gained a lot more respect for the craft and the people who practice it along with the necessary theory and practice to join their ranks.

We can now grab a rope and the rest of the gear, go out on a hike and climb a rock or three along the way. The freedom this gives us is amazing.

Having been climbing for some time already and having been on a rock a few times before (although always as an inexperienced second) I didn't expect things to feel differently. But the fact that you have your fate much more firmly in your hands makes a for huge mental shift.

And there's one other thing: with the climbing we'd done before, as soon as you got to the top, you sat into the rope and were lowered down. One could of course enjoy a quick look around or a triumphant yelp, but you wouldn't want to keep your belay waiting while you were admiring the scenery or looking at the surrounding climbers.

Whereas here, as soon as you got to the top, there is no belay. There's just you. You can stay on the rock for as long as you want and if there is a second to follow your route, you will easilly stay there for at least 20 minutes. 20 minutes attached to the face of a rock 8 storeys above the ground. Ample time to look up and down and around. To enjoy the view.

I did not bring a camera on my ascends but I wish I had. Those would have been the most beautiful photos of the day.